Never settle, experiment even if the end result is a regression. In other words, strive for continuous improvement.

Those that follow this blog with any degree of regularity know that continuous improvement is a corner stone mantra of mine when it comes to paragliding.

Communications are critical in our sport. Aside from flying tandem, we operate effectively alone. Even when flying with a partner, a stroke of luck or a subtle change in conditions can cause significant separation. Being able to quickly and easily 're-sync'  with a flying buddy can have a big impact on a paragliding cross country flight ('going XC'), especially in 'sticky' conditions where climbs are few and far between and route changes may be needed.

Even more important is the ability for us to communicate with fellow paraglider pilots and rescuers in the event of a mishap.

Simply put: Some form of comms should be considered on par with the reserve - don't leave the hill without it.


Family Radio Service (FRS) / General Mobile Radio Service (GMRS) radios are often the mainstay of paragliding schools due to the lack of a license requirement for the operator and low cost. But beyond the school environment, especially in Canada, they see little use in the paraglider population.

Limitations on frequency (limited to 14 channels of FM UHF for FRS and 22 for GMRS) and power (0.5 watts for FRS and 2 watts for GMRS*) will find these units quickly replaced by the newly minted Novice.

* GMRS radios in the US can operate at up to 5 watts of power but have a licensing requirement. US GMRS radios that do operate at 5 watts are technically illegal in Canada.


* CTCSS (Continuous Tone Coded Squelch System) - often referred to as 'privacy' codes. Privacy is a misnomer - this sub audible tone system actually acts more as a filter. If you have a CTCSS code selected, you will only hear transmissions from other radio operators who have activated the same code. Anyone who has the code unselected ('open') will hear everything on the channel, including transmissions by those employing a CTCSS code.  Using a CTCSS code is a good way to help filter traffic on a commonly used channel if 'chatter' is a problem.

Airband is limited to 108 to 137 MHz, with the upper 19 MHz typically reserved for AM voice.

2 way comms between dedicated AM and FM radios is not possible, though some higher end FM units can receive AM. This is important to remember for the pilot who may wish to use a non airband radio to communicate with other free fliers yet still be able to maintain contact with a control tower and/or powered aircraft - 2 different radios will be required. Attempts to bring to market a dual purpose radio have thus far demonstrated less than stellar results.

A government issued license is typically required to be able to operate an airband radio.


An anachronism employing AM in the 27MHz frequency range, you may ask why Citizens Band is even mentioned here.

Australia implemented their own take on an unlicensed radio service for the general public which continues to see widespread use in rural parts of the country. Australian CB operates using FM around 477 MHz. It is commonly used by the paragliding population in that country. Something to keep in mind if travelling down under.


Go on any course, attend any comp and you will find amongst the equipment prerequisites - handheld 2m Amateur Radio. Primarily operating between 144 and 148 MHz using FM, Amateur Radio has gained widespread adoption by the paragliding community due the portability/light weight of the current generation handhelds, reasonable power output (typically 5 watts) and a healthy parts aftermarket. In addition, a plethora of makes and models exist for the pilot to choose from to fit any budget -  everything from high end Japanese built units down to mass produced Chinese variants.

One model in particular stands out: 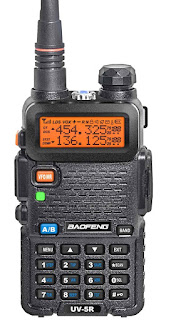 The -5Rs low cost, reasonable quality, and compatibility with the Kenwood headset connector has made it the go to radio for pilots around the world. Gone are the days where a 'cheap' radio would run in the hundreds of dollars, now options like the Baofeng can be found for less than $50 Canadian.  A radio lost, stolen, soaked, or seized can now be met with no more than a resigned sigh given that it is effectively disposable at the aforementioned price point. One could simply buy two -5Rs and have a spare waiting to be put in service for less than the price we would previously pay for a single radio.

One need only look at the frequency ranges supported by the Baofeng UV-5R to get a sense of why I specifically mention it.

Look at the above tables. I'll let you deduce what is possible (though very likely illegal in certain locales - you the reader are responsible for making sure that this radio will not break any laws where you are flying) .

The majority of countries that allow use of Amateur Radio have licensing requirements.

Continued with Satellite Trackers in Part 2
Posted by FlyinOrange at 17:23

Promote Your Page Too